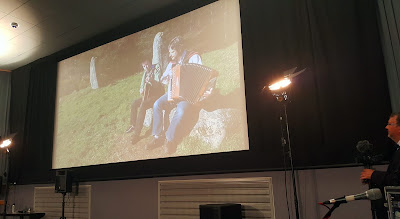 On July 2 1687 James II disbanded the English parliament, on the same day in 1900 Sibelius premiered Finlandia in Helsinki.
July 2 1941 saw Noel Coward's Blithe Spirit premiered in London. And on July 2 1863, the participants @ the Battle of Gettysburg began a second day of bloodshed.

Here in Aberdeen on July 2 2019 there were roadworks outside Robert Gordons and the Triple Kirks was bristling with scaffolding. The Belmont Cinema featured a few popular films and the first ever Doric Film Festival took place alongside the mainly Hollywood offerings such as Toy Story 4, The Queens Corgi and Boyle's Yesterday.

Developed and presented by Frieda Morrison of Scots Radio fame it was a lively affair and, alongside some really splendid entries from schools, individuals and groups there were fine speeches from a variety of folk. I particularly liked the school entries and Meethill Primary headed the pack with a quite splendid docu-Doric take on the Bloo Toon.

Alongside the fine speeches there was a video presentation from Stan and Ollie's Jon Baird. He speaks the Doric but not of course in his conversations with the likes of Scorsese who maybe wouldn't understand the words. Gordon Hay - a man hugely tasked with Doricising the bible - read from a Babel inspired Genesis 11 v 1-9. 'The whole world had found one language and a common speech'.
The individual entries and the group entries were fab and I am told that The Doric Film Festival will soon be publishing all and sundry on-line for all to view and enjoy.

Outright winners in our section were some splendid folk from Torry Heritage Group and no doubt the local media will be revealing the news of the win quite soon.

Our entry - one of some 30 - was shortlisted in the group category and we got our moment of fame on the silver screen which was of course splendid indeed.

We have published our film on Youtube @: Awa we Gaed tae Aikey