In a quite separate piece of disappointing street-theatre, it seems that residents on Skye have decided to take citizen action regarding the defacement of the Fairy Glen over at Uig. For years, the visiting foreign hordes have been building rock-stacks along the path beside the river. And following a weekend of destruction by enthusiastic locals, the little sculptures which litter the area have been demolished to make way for health and safety.

Seemingly, alongside aesthetic and environmental concerns, fears that sheep might become victims of tumbling pebbles prompted the act of vandalism. The islanders of course see it differently as a sign erected on the roadside makes clear. The words read ‘Please do not build stone stacks or leave litter as they are a danger to the animals who graze here’. Each to his own I suppose.

But, I have news for the folk of Skye. Scotland is littered with stone-stacks dating from the time of the Pyramids and the likes of Aberdeenshire boasts around 10% of all of the standing-stone-circles to be found in the entirety of the UK.

I don’t know about the Western Isles, but I do know that there are countless folk tales of local farmers in the Garioch who, having appropriated standing stones for use in construction projects, quickly returned the monoliths to their point of origin following a period of bad luck. Death, bankruptcy and misfortune typically followed the various desecrations. 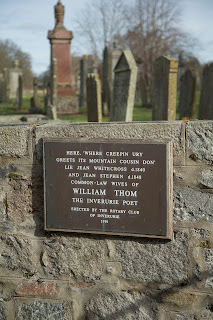 Anyway, on a recent wander down by the River Don at Inverurie, Janice and I stumbled across a sculpture park beneath a railway bridge near the Bass. It’s slightly off the beaten track although local dog-walkers and fisherfolk will instantly recognise the location.

Just in case folk from Skye come visiting with sledgehammers, I won’t reveal the actual site. Suffice it to say that an Inverurie poet knew the place intimately and there is a plaque on the wall of a local graveyard which refers to the location in his splendidly poetic stanzas.

Words and images © Duncan Harley – Inverurie September 18th 2018
Duncan Harley is author of The A-Z of Curious Aberdeenshire plus the forthcoming title: The Little History of Aberdeenshire- due out in March 2019