An Evening of Eric and Ern @ HMT Aberdeen 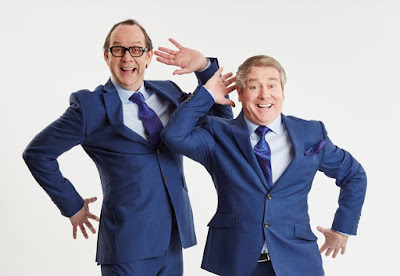 Ian Ashpitel and Jonty Stevens capture the brilliance of Morecambe & Wise in this homage to Eric and Ern and, if the PR fluff is to be taken seriously, you’ll feel like you’ve seen the real thing when you take in the show described in glowing terms as being:
‘Straight from their hit West End, Olivier nominated show "Eric and Little Ern" which Ian and Jonty wrote and performed in ... see them as Eric & Ern and be taken back to a world of sunshine and laughter.
Their brilliant homage hits all the right notes! From Greig's Piano concerto to Mr Memory, "Arsenal!" A show full of Morecambe and Wise's most loved routines. Highly acclaimed for their portrayal of the legendry comedy duo, Eric Morecambe and Ernie Wise, talented actors Ian Aspital [sic] and Jonty Stevens return in this new and fabulous show, crammed full of renditions of those famous comedy sketches, evokes memories of times when whole families would huddle around the telly on Sunday evenings to share in the much loved antics of Britain’s national treasures.’

It has to be said of course that the genuine Eric and Ernie, and not necessarily in that particular order, bore a passing resemblance to one-time German Chancellor Helmut Schmidt and German Free Democratic Party politician Hans-Dietrich Genscher – check Google Images if you doubt the uncanny likeness.

Mind you, there the similarity ends. Neither Helmut or Hans appeared at the London Palladium and they reputedly shared a somewhat wooden sense of humour. Neither of the pair, in all probability, knew how to play the piano badly whereas Eric Morecambe, for one, certainly excelled in this department.

But in the big scheme of things, for those of us of a certain age who can actually recall sitting round the telly on a Sunday evening all those decades ago, this show looks completely unmissable.
Ah, Bring Me Sunshine. And please, please tell me how to spell Ashpitel ...
There’s a sneak preview @: http://www.ericandlittleern.co.uk/