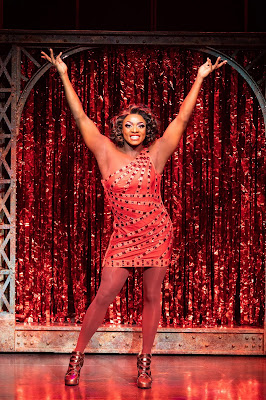 The Kit Kat Klub meets Ridley Scott's Hovis Bicycle Boy halfway up the cobbled hill in this tale of a down-on-its-uppers footwear factory revived in the nick of time by a troupe of handsome men in dresses.
Based on the original 2005 Deane and Firth film and with an impressive musical score courtesy of Cyndi Lauper, Kinky Boots apparantly reflects true events and this feelgood tale of crotch-length shoes should please folk of all genders intent on a good night out.
Following a death in the family, Charlie Price finds himself in command of a bunch of singing mill-workers and inherits the failing family shoe-business. What to do for the best, he wonders. Enter stage left lovely drag queen Lola. A seedy nightclub and a troupe of ‘Land of Lola’ drag-dancers later, Charlie has his Damascus moment. Seemingly the world of drag is replete with unreliable footwear. Yep, I kid you not and what’s not to like? Make them red and make them sturdy is the mantra.

Some suitable product development ensues before the splendidly re-invigorated Price and Sons take tubular sex to the catwalks of Milan. Overnight, Charlie Price’s fragile inheritance is saved from bankruptcy and all becomes well in shoe-factory-land.

It’s a cracker of a tale and, alongside the visual value, dwells variously on skewed parental expectations, the overcoming of prejudice and the transcending of stereotypes.
Full marks to Kayi Ushe’s Boxing-Queen Lola and Joel Harper-Jackson’s footwear-boss Charlie Price. Lola is of course the central driving force behind the show and his combo of muscle and mascara works well. Kayi is at ease with either and delivers a spellbindingly powerful performance. 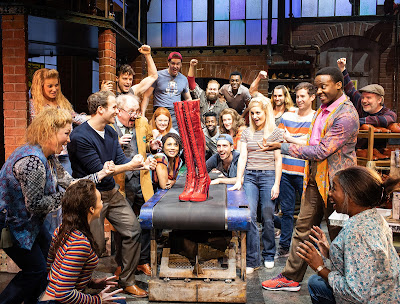 Staging is spectacular and vocal numbers – there are eighteen - add up likewise. Sound balance during ensemble numbers could be improved however.

I first saw this show a good few years ago and was impressed. I am still impressed. Go see. You’ll not be disappointed. Plus of course the production offers some “two-and-a-half feet of irresistible tubular sex”.

Directed and choreographed by Jerry Mitchell, Kinky Boots plays at His Majesty’s Theatre Aberdeen until 4 May.