The Railway Through Insch - by Duncan Harley 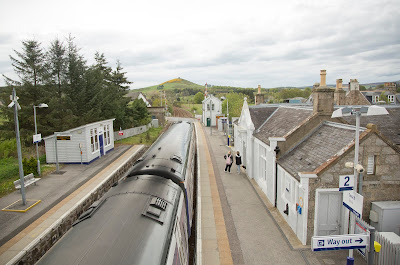 The Garioch town of Insch somehow managed to retain its railway station despite the re-shaping of the railway system following the Beeching Reports of the 1960’s and today provides rural commuters with fast access to the oil capital of Europe and in addition hosts a community run museum in the former ticket office.
Insch Connection Museum, a Registered Scottish Charity, hold an extensive archive relating to Insch’s past. The museum’s focus for 2016 was “Souters of Insch”, a family business once central to Insch’s economy. Trading in everything from fencing supplies to wedding presents, the Souter brand was instrumental in bringing both electricity and employment to the village and for over 90 years operated a popular general goods store on Commercial Road. The town today boasts an aerodrome, a manufacturer of landmine clearance machines plus a good selection of archaeology. It can also claim the distinction of being one of only a very few places in Scotland bombed by the Germans in the First War.

Perhaps oddly, Bradshaw’s Railway Guide makes scant reference to the Garioch village commenting only that “Insch, close to which is Craigievar, is the seat of Sir W. Forbes, Bart; here fairs are held on Friday.”
Writing in around 1863, Bradshaw obviously was completely unaware that the very first section of The Great North of Scotland Railway linking Aberdeen to Inverness was laid just two miles down the line at Westhall Estate following the cutting of the first sod by Lady Elphinstone in the November of 1852.