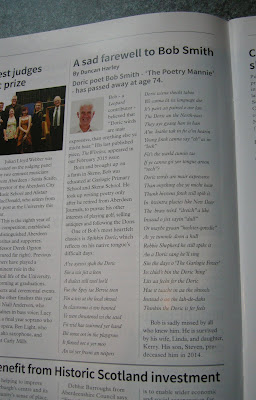 It's maybe just a few weeks till the annual anniversary of the demise of Bob Smith. I am always ahead of the game and just thought that you might be happy to remember the splendid man. Bob famously spent a latter career slaving over adverts for an uncaring local paper and was a fierce critic of Donald Trump.
He would never miss an opportunity to mention Trump in his popular poems, which featured weekly in Aberdeen Voice.

He features in my two books along with the likes of Wallace, Bruce, Byron and T.E. Lawrence. And why not.
All in all, Bob contributed in excess of 200 poems to the Aberdeen Voice and had a few of his pieces published in the glossy Leopard. There maybe should have been a book but he never made it into that sort of print.
Occasionally I think of the man. For some strange reason, his memory popped up today despite the few more weeks till the anniversary of his passing.
Here, for what it's worth, is his take on the Doric:
A’ve ayewis spak the Doric
Sin a wis jist a loon
A dialect still weel loo’d
Fae the Spey tae Bervie toon