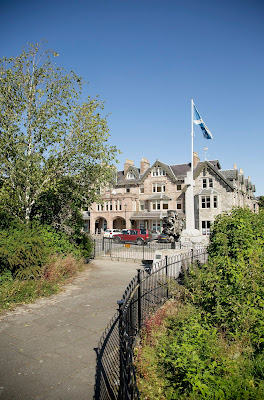 Fatal aircraft crashes, often due to accidents in training, were fairly common in wartime. Places such as Ballater, Aboyne and Logie Coldstone bear witness to the carnage.

In the October of 1943 for example, a Bristol Blenheim of 526 Fighter Squadron based at Inverness crashed on high ground at Morven.

Another crash, this time of a Wellington bomber on a training mission out of Lossiemouth, occurred in 1942 high up in the hills behind Braemar.

A gamekeeper out checking the deer herd at Glen Cluny eventually spotted the tail of the downed aeroplane sticking out of deep snow and alerted the local policeman. The eight aircrew had lain undiscovered for weeks and consisted mainly of New Zealander, Australian and American servicemen in training. Eventually, some 45 years after the tragedy, one of the plane’s Rolls Royce Pegasus engines was brought down from the hill and mounted on a granite plinth alongside the Braemar War Memorial as a tribute to the lost aircrew.

In more recent times an 81-year-old pilot had a lucky escape when the light aircraft he was flying crashed into a fence at an aerodrome near the village of Insch. The pilot had been flying solo out of Inverness and despite 740 hours flying experience lost control while landing.

An Aircraft Accident Report concluded that “he had lowered full flap earlier than usual and had allowed the speed to decay during the left turn leading to the stall and wing drop”. In this case the pilot survived although the aircraft, a Druine D62A Condor, was badly damaged in the incident.

Ironically, the aircraft had been attempting to land at the aptly named Runway 13 ...