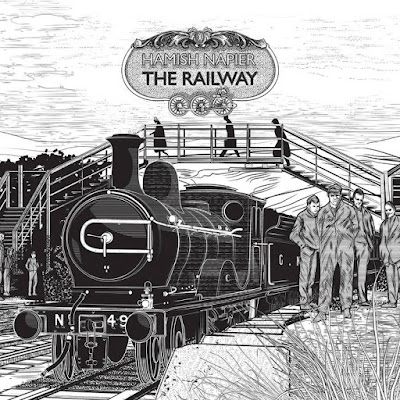 I was sent a copy of Hamish’s Railway a few months ago and it stood for a while on my dusty shelf alongside a few books and discs needing a review.
I should have known better than to ignore the music. Various of the books amongst the pile will never make it onto either the Times list or the Waterstone shelves and god only knows why the publishers send me them.
I must be on some difficult writers list.

Hamish, or his agent, has been sending me his work for a few years and in the Leopard/Aberdeen Voice days, I reviewed positively alongside the music of other folk such as Thran Backwoods poet Gordon Duthie. Gordon makes music in his bedroom and broadcasts it all around the world. I've ranted on about his music many a time and in the course of ploughing through some glossy copies of Leopard Magazine dating from early 2015 I recalled that we met up in Kintore to have tea and scones before heading off to the local graveyard to do a photo-shoot alongside the Pictish stones.

As for Hamish, well I’ve never actually met the man although fellow band man James Lindsay might just be a familiar.

As for the tunes. Well they are well worth the hearing. As you might expect, Hamish’s The Railway includes numbers titled ‘The Station’ and ‘The Speyside Line’ and what’s not to like.
Fifteen tracks make up the album. All are fine.

Celtic Connections Hamish has been treading the rails for a good few years and this latest album  showcases a line-up including Patsy Reid, Fraser Stone, Ewan Robertson and James Lindsay.

Dedicated to railwaymen all around the north-east, this follow-up to Napier’s River is one not to be missed.

There’s maybe a taster video on YouTube. But, for my money, I’d just bung a few quid onto Amazon Prime or wherever and download it @ once.

It's maybe @ The Railway