The Woods of Blelack @ Logie Coldstone – by Duncan Harley 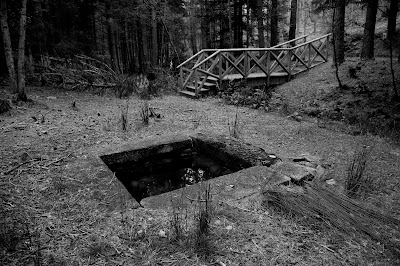 Logie Coldstone in Aberdeenshire is home to the lost wells of Poldhu. Hidden deep within Woods of Blelack and fed by natural spring water, the granite-lined mineral baths at Poldhu were once a popular attraction for those seeking cures for virtually any ailment.

Mentioned in the First Statistical Account of Scotland (1791-1799) they are described as:
“a mineral spring in the parish of Logie Coldstone, a little to the south of the church, called Poldow, which in Gaelic, signifies a Black Pool, the water of which some years ago was much, and successfully, used for scorbutic and gravelish disorders”.

By the time of the Second Statistical Account (1834-1845) interest appears to have waned and the wells at Poldhu were said to be “occasionally resorted to by some, for the benefit of their health, and by others for amusement”.

With time, a 6ft high rhododendron thicket enveloped the wells and hid them from view.
Recently however, interest in the historic site revived following the chance discovery by members of the Cromar History Group of an old photograph showing the wells in use.
During 2008, with the help of various partnerships plus funding from the Adopt a Monument Fund, the accumulated vegetation surrounding the wells was removed, new drains were dug and the original stonework refurbished to the original Victorian design.

Nowadays, of course, there are no outlandish claims regarding cures for scorbutic and gravelish disorders.

Duncan Harley is author of The A-Z of Curious Aberdeenshire plus the forthcoming title: The Little History of Aberdeenshire - due out in March 2019