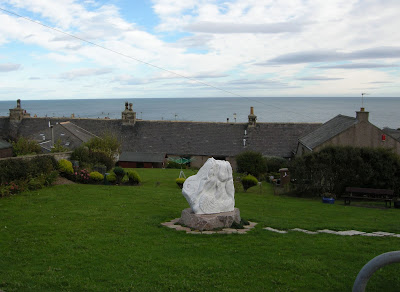 We had a wee stroll round Cove harbour today.

The village at one time was home to Isae Caie and her residence in the place is celebrated in the coastal village in the form of a splendid marble monument sculpted by Brazilian artist Albertino Costa with support from local residents.

I penned an article about the woman – The Last Fishwife – in some forgotten Leopard or other and Albertino and I tracked down her grave on a wet and stormy February day for that long-lost feature article.

Subject of litigation, I have no real idea why, Cove Harbour is now largely bereft of fishing boats. There are a few small boats left-over on the stony beach and it looks tidier now and that’s a fact. A private plastic-surgeon has won his case but has perhaps lost his reputation in a strange but true tale of the taking over of land beside the sea by invasive land-owners.

It somehow reminds me of a childhood haunt along Loch Fyne. Some rich mogul had bought a plot by the shore. Having erected a house and swimming pool, he banned folk from walking on the beach. I crept by as a child afraid that he would emerge and threaten. He never did, but the threat was always there.
Alongside the Cove harbour-front, there is dog-shit left by uncaring owners and an overgrown Cove-in-Bloom planter completes the sorry scene. There are also some concrete steps which lead to where Albertino’s sculpture once sat plus some tumbled-down but partly sculptured boulders. All in all, it is a sorry seaside spectacle unworthy of even Donald McGill.

Thankfully, Albertino’s marble sculpture now sits proudly further up the hill near the village shop and is looking nicely weathered.

The tide was out when we visited and we found some small tears of sea-glass which perhaps reflected the tragic fate of Cove Harbour.