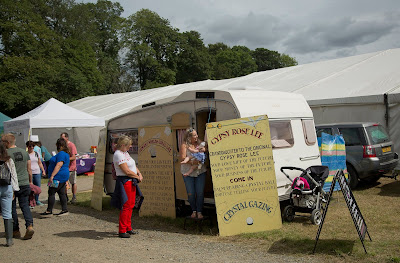 I recall seeing a trio of caravans at Keith Show a decade or three ago, each emblazoned with hoardings offering palm-reading and each with a long line of hopefuls awaiting the chance to cross a palm with silver in fair exchange for a glimpse of the future.

It was in the grander days of the country shows. Keith was filled to the gun-whales with folk intent on a bit of fun and maybe a dalliance or two over the show-days and up at the show-park two full-grown heifers were roasting over a couple of spits.

Following a day selling fancy goods, I wandered over to Reidhaven Square, which is where I found the caravans.
They were top of the range trailers with all the mod-cons and, to the untrained eye at least, seemed to represent the height of traveller luxury. Lace curtained and shiny with chrome and fancy ornaments in the windows, each claimed a connection with the original Gypsy Rose Lee.

Two proclaimed direct lineage, a daughter I recall and maybe even a grand-daughter and the third – although my memory is dim on this – may have been a niece, or perhaps a grand-niece or even God-daughter. Imagine that, being Gypsy Rose Lee’s God-daughter. How cool would that be.

A quick check on Wiki reveals that Gypsy Rose Lee was born in Seattle on 8 January 1911 and christened Rose Louise Hovick. An actress and author of such classics as Mother Finds a Body and The G-String Murders, she was seemingly famous for her innovative striptease act and died in April 1970 of lung cancer. Her 1957 memoir, Gypsy: A Memoir was immortalised as the stage musical Gypsy: A Musical Fable starring – amongst others - Ethel Agnes Zimmermann as a sort of Janis-Joplin styled Rose minus of course the stripped-back blues tracks.


The A-Z of Curious Aberdeenshire is available from Amazon