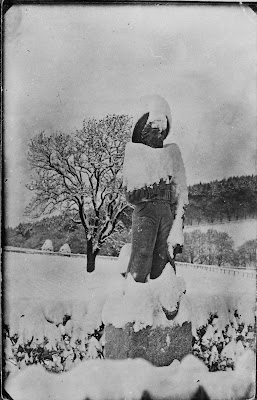 This seasonal image from the 1930's, courtesy of Peter Donaldson of Grampian Transport Museum, was taken by Postie Lawson of Craigievar Express fame in the days before the statue took up his stance in Meldrum town centre.

Known locally as ‘The Mannie’, Oldmeldrum’s Sailor Boy Statue is a well-travelled life-size stone sculpture of a mariner clad in period costume, which nowadays stands proudly outside the Meldrum Arms Hotel on South Road.

Rumours abound regarding his provenance. Few know his true origins and some even claim that Spanish gold lies buried beneath his feet. Originally, he held a clay pipe in one hand and a small anchor in the other. Clad in the style of a 19th-century French sailor, he is sculpted from Portland Stone - the same material that Whitehall’s Cenotaph is made from.

Mysteriously and many years ago The Mannie is said to have been purchased by Alford’s Postie Lawson - inventor of the steam-powered Craigievar Express - at a local farm sale for just five shillings. A fact confirmed by Grampian Transport Museum who state that the statue stood outside Lawson’s house, at Craigievar until 1938, when it was relocated to Oldmeldrum.

If the Portland Stone claim is accurate, before taking up residence at Meldrum, the old salt may have made his way Northwards to Aberdeenshire via Dorset, where he is rumoured to have been commissioned by the widow of a drowned seafarer.

Nowadays a Grade C-listed statue, Oldmeldrum’s Mannie would no doubt appreciate being reunited with the missing bowl of his clay pipe which he appears to have lost along the way.