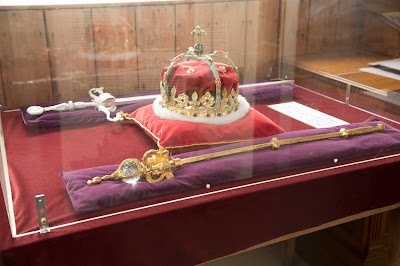 It’s been hot and sticky in the Garioch with highs of around 27C and still no sign of a promised shower to break the humidity.

On the email front, B & Q have been in touch to advise that the pensioner’s discount of a hefty 10% each Tuesday is now restricted to garden items only. CEO Mike Emery has at one fell swoop alienated everyone on the planet over 60 with the pronouncement that “from 3 September 2‌01‌8, the 10% discount we offer to you every Wednesday will be limited to gardening products when you shop and take away in store”.

Has he even heard of Homebase I wonder. It’s amazing how much negative publicity you can buy in lieu of a £2-97 discount on a pot of black Hammerite.

Then there was that theft of crown jewels from a museum in Sweden. Some thieves in a boat seemingly made off with the crown and sceptre. Worth some humongous amount of Kroner, the royal accoutrements seemingly rival the Scottish Crown jewels if tabloid accounts are to believed in their entirety.

Well I have news for the Swedes. In the far-off siege of Dunnottar Castle the Scottish Crown Jewels were under threat from an English army. The Regalia - a crown, sceptre and sword - had been placed within the fortress walls prior to Cromwell’s eight-month siege during 1651. Sometime during the siege, no-one is quite certain when, the Royal Regalia were smuggled out to be hidden at nearby Kinneff Church leaving the besieging army with a somewhat hollow victory.

Cromwell and a later Montrose seem to have contented themselves with the burning of nearby Stonehaven while a previous Wallace, bless the man, infamously burned down the castle’s church in 1297, with the English garrison imprisoned inside.

Known widely as The Honours of Scotland, the smuggled jewels are now on display, subject to an admission charge, behind the walls of Edinburgh's Castle.

And as for the Swedish royal jewels, they could be anywhere on the planet.

Duncan Harley is author of The A-Z of Curious Aberdeenshire