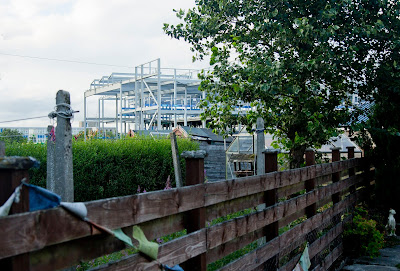 That’s the new school building at the foot of my garden finally taking shape.

I blogged the destruction of the hallowed sports ground some months ago and the digging up of the turf finally ended when the steel-erectors moved in a few weeks ago.

From grass to mud the project took around 16 weeks and from mud to steel a further 6 weeks has elapsed although it will be a year or so until the splendid complex is finally completed. Hopefully some royal or other will arrive to open the place as that would be fitting probably. Prince Charles would be nice, or maybe if the project is delayed for a bit, or goes over budget, then maybe Prince Louis might unveil the inevitable shiny plaque.

As an aside, despite the forward planning and the public consultations, I suspect that the solar panels on the structure's roof face somewhat to the North instead of facing the more conventional South, where – given that we inhabit the Northern Hemisphere, they might just receive the most sunlight.
But who am I to point out this quirky error. I flunked math at school after all.

On the plus side, the developers are promising a swimming pool as an adjunct to the structure and I am mega-looking forward to having a council-funded pool in my back garden.