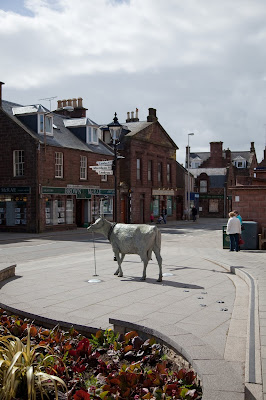 Following on from last nights tirade about the lack of print-media for budding authors within the bounds of the North-east, I checked to see if an old article was still available on-line.

It was a piece about a cow. Not just any cow you understand but a cow from Turriff. Us bloggers are fond of cows and a good friend informs that they always face the same way no-matter what the weather.

I had penned a few words about the sturdy beast in a Leopard article or two. Something about Lendrum to leeks as I recall. The late Bob Smith and I had cooperated in an article to record the tale. I penned some words and Bob compiled a poem in his native Doric.

As I recall Bob, or Smithie to his friends, concentrated on the National Insurance ramifications of the tale of that famous ‘fite coo’ whereas I relished the political ramifications  – the House of Lords were humbled into submission by a triumphant parliament and stripped of their power of veto.

Cynics of the time suggested that the workforce was being manipulated by the land owners and bullied or perhaps even being encouraged into opposition. For example, a crowd of around 1500 packed Turriff’s main square on the day of the proposed sale of Mr Paterson’s cow to meet the Insurance arrears due by him. And an effigy of the Welsh Prime Minister was incinerated at Inverurie in possibly the most recent act of defiance committed by the citizens of the Garioch capital.

Our coo’ article was published first in The Scottish Review and I recall mirroring the piece in Aberdeen Voice and maybe in a Leopard aside. Sadly perhaps, the Review has deleted the article but it’s still on back-order for free in the Voice @: https://aberdeenvoice.com/2013/11/turra-coo-monumental-myth/

And, in case you can’t be bothered finger-clicking on the link, here is Smithie’s poem in its entirety: