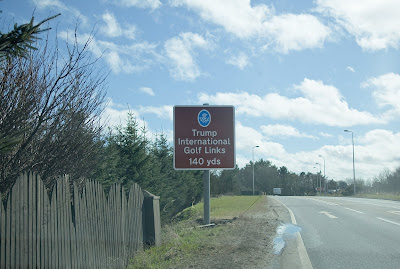 On the day that Aberdeen International Airport saw a Trump plane land on the tarmac to disgorge some retinue along with a rumoured son called Eric, I finally realised that Air Force One is too large to land anywhere in Scotland.

In fact, try as he might, the half-German half-Scottish golf-magnate will thankfully be prevented by his presidential status from stopping off unannounced at Aberdeen for a round of golf.

The big bosses at Aberdeen Airport must have foreseen this. Calls for runway expansion at Heathrow have made headlines over the past decade and the, perhaps outdated notion of a UK air-hub, has in consequence made the southern counties once more vulnerable to conquest from overseas. Not so in the Shire however where anything bigger than an Airbus needs flaps down, brakes full-on and reverse thrust to avoid running out of tarmac and smacking right into Dyce caravan site.

Of course, Gatwick should have been the landing-field of choice for the presidential minders on this auspicious day. I mean, it’s the second busiest airport in Britain and the arrival of a 45th president would almost certainly go unremarked amongst the 950 or so aircraft movements per day. With protesters intent on enticing the man to tweet his disdain for the special relationship, the well-tried notion of hiding in full view – there are around 86k fellow-travellers plus some 30k busy staff milling around the terminal each day – should have worked in his favour.

Mind you, he is in the habit of wearing a set of bright orange wigs. Perhaps he should have gone Easy-Jet to Gatwick then bussed it on to Stansted.