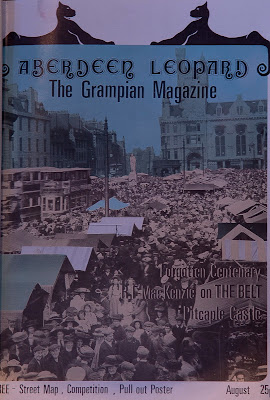 As the new book nears completion I have had time to reflect on some still-to-be completed writing projects. Few of us live to be much beyond a hundred and there are quite a few unpublished tales stuck within my bulging filing cabinet.

An armoured train, manned by a Polish Dad’s Army regiment which once patrolled the Buchan permanent way plus a piece about the last of the Covesea millwrights lead the pack and the strange tale of sculptor Alexander Brodie’s lonely suicide are just examples of the buried genre.
Then there is the story of a long-lost number 10 Bluebird buried at Rothienorman, a Victorian Music Hall sandal scandal and that quite splendid tale of the last voyage of the Girl Pat. I could go on …

But where to begin.

The lack of a regional magazine, now that Leopard has been abandoned by the university and then swallowed by a bigger fish, has led to a dearth of publication places and in the big scheme of things even David Toulmin has been cast aside by the powers that be who until a year or so ago gladly funded an annual literary prize in his name.

There was an attempt by a group of folks, calling themselves innovators, to revive creative writing in the Shire a year or so ago. Titled 'Sporicidal Suicidal Sporadicals' or something broadly sillier, the promising project came to nothing despite some braveheart claims. And, in the end, the afflicted folk - in reality a couple of would-be journos from some lowly Deeside settlement, did nothing much more than to insult and alienate the very folk they claimed to represent. Then there was the splendidly anachronised Kicking the Boat Out – a slightly snobbyish pseudo-platform for god knows what end. Or was it Chucking out the Boat alongside the Baby's Bathwater. I can't really recall or even-care.

So, where is the new print medium for the small writers of the North-east?

Answers on a post-card please.