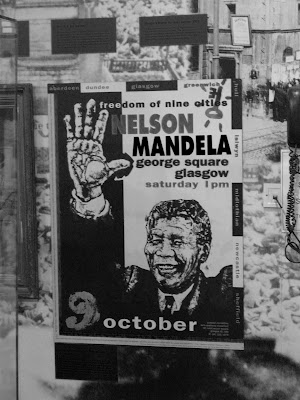 As the tributes flow from those who value Mandela’s contribution to international statesmanship it is worth recalling his impact on the city of Glasgow all those decades ago.
Awarded the Freedom of the City in 1981 – some 12 years before his visit, the terrorist-turned-president wowed the crowds as he made his way around George Square in an official visit to thank folk of that dear green city for their support during the difficult years.

Not many now recall the furore caused when in 1986, the local council renamed St George’s Place, then the location of the South African consulate, as Nelson Mandela Place in his honour, thus forcing the consular officials to advise visa seekers and others to contact the embassy at the embarrassingly re-named Mandela Place postal address.

In a speech at the City Chambers in Glasgow on 9 October 1993, Mandela famously said: "While we were physically denied our freedom in the country of our birth, a city 6,000 miles away, and as renowned as Glasgow, refused to accept the legitimacy of the apartheid system, and declared us to be free."

As it happened, my eldest son was in George Square on the day that Mandela emerged from the City Chambers during the statesman’s one and only official visit to Glasgow.

A babe in arms, he had accompanied his mother to a demonstration outside the International Whaling Commission Conference in a nearby street. The press made a big thing of the protest despite the fact that only around a dozen protesters turned up to hurl abuse at the Japanese delegates.

After the photographs had been taken and the anti-whaling protests had been duly noted, both protesters and press headed round to George Square where a smiling Mandela wowed the admiring crowd.

I doubt that my son would even remember the remains of the day. But it is nice to think that he came within yards of meeting the man from Robin Island who dismantled Apartheid.