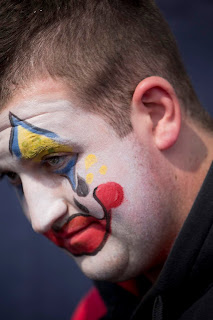 The news that Glasgow Caledonian University has a new chancellor naturally fills me with Aberdonian pride. Not that I am from the granite city, or indeed the fair city of Glasgow; but I am sure that the Eurhythmics lady will do a sterling job and I wish her good luck.


I met the woman in some far off year or so at Haddo House. She had fund-raised something about the then Arts Trust and was keen to promote the struggling theatre venue. I recall that she gave a short speech before advising listeners that “Yooose bastards had better not fuck it all up and I’m telling you you'd better not!” – or something splendidly similar.

It was a long time ago and I may have gotten one expletive mixed up with another. Some Royals who were present for the Lennox speech left early in a fit of embarrassment despite the promise of champagne.

In some ways, Annie’s Haddo tirade reminded me of Taggart star Mark McManus’s appearance at a long-forgotten trade fair in the Aviemore complex some decades ago. Whisked around by attentive publicists, the inebriated detective uttered the immortal words “There’s been a bad murder in the backstreets of Glasgow and I’m telling yooose that we will find out who did it and that's a fuckin' fact and yooose better believe it or otherwise! And I'm telling you for real and that's another fuckin fact!” before being spirited off by his minders.

Lennox may have had a point though since a few years on, and just after I had been turned down for a fundraising post at the Haddo venue, it all went pear-shaped trust-wise. A lucky escape for the both of us I suspect.

And of course, as always, the hopeless Google has no solution as to the correct spelling of the word ‘Yooose’.