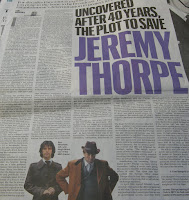 Yes. I know it’s Thursday already, but I never quite got around to reading the Sunday papers.


Alongside a good few splendid pieces about the new - yawn - Jeremy Thorpe revelations there is a quite splendid article by Laura Pullman regarding the end-tale of that churchman Jonathan Aitken.

Seemingly Mr Aitken, a former jailbird, is off to buy his cassocks prior to some investment or other in St Pauls. At 75, the former Conservative cabinet minister, and perjurer, has finally found God just in time no doubt to be welcomed at the pearly gates.

Then of course there is the ongoing Jeremy Thorpe affair. Lambasted to the grave - he died from Parkinson’s in 2014 -  not for being gay but for being a well-defended establishment icon. Jeremy, or ‘bunny’ as he preferred to be called, made a complete mockery of both British justice and the then, quite respected, Liberal Party. Heath, the penile wanderer, and his sad cronies were at least denied a coalition as a result.

In a follow-up article in Tuesday’s Guardian, Rajeev Syal explores Labour grandee Jack Straw’s pivotal role in the lurid cover-up of the intended murder of Thorpe’s male lover. The Woodentops of the Gwent police are seemingly hot on the trail of the once dead but now seemingly now resurrected hitman. God help the man when they finally Google him.

On a more positive note, the Press and Journal reports today on the strange but disturbing case of the Microsoft data centre which has sunk off the Orkney coast. Now that is worth reading about.


Duncan Harley is author of The A-Z of Curious Aberdeenshire