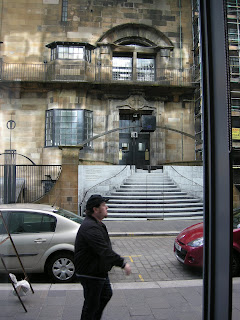 It’s almost as if someone has it in for Rennie MacIntosh. Not only is Hill House over at Helensburgh falling to bits, but this weekend his quite splendid creation in Glasgow’s Scott Street has - for the second time in less than half a decade – burned to the ground.
Hill House escaped the attentions of the young men of the Luftwaffe although my great aunties flat in nearby Kilmacolm suffered a near miss and records indicate that around 80% of Clydebank’s housing stock was destroyed or badly damaged in the onslaught. Indeed, around 600 folks were killed during just two nights of terror bombing in 1941.

The NTS of course nowadays look after Hill House and charge folk a tenner to look at it. Good luck to them is all I can say. As for the MacIntosh Building at the Glasgow Art School, I have much more sympathy.

The NTS plans to enclose Hill House within a plastic ‘shield’ are just plain silly and I am sure the man himself would agree. But, the art school building could maybe have benefited from a shield in the form of a sprinkler system. Seemingly there are unanswered questions as to why sprinklers failed to stem the first fire and no doubt there will be similarly unanswered questions regarding the performance of the new sprinkler system.

Indeed, one can almost imagine the restoration architects being hauled before some parliamentary committee of enquiry or other and being faced with the question: "Erm, you did install sprinklers did you not ?"

A headline in today's Times insists that a sprinkler system was indeed installed prior to the latest disaster. But, sadly, the pumps required to power the system remain with the manufacturers. Seemingly, stand-alone fire-suppression systems can be employed in sensitive refurbishment situations. But, in the case of the Glasgow building, this preventative measure was not included within the plans.