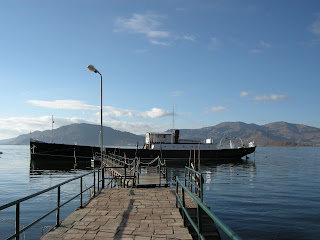 Described variously as Scotland’s Tom Waits and as the Dylan of Dundee, the man passed aged 60 in the October of 2012. He left a legacy of immortality and also, or so I am told, a splendid boat which he constructed from redundant pallets in the back garden of his Dundee council house.

Bands such as Hens Teeth and Skeets Bolivar were his stamping grounds and his solo performances were legendary.

Lyrics such as: ' If Dundee was Africa and Fife was Antarctica; if Arbroath was India and Perth was Peru' led me to search my image collection for a shot of the SS Yavari. Made famous by Michael Palin in some distant travelogue or other the diesel driven boat was carted over the Andes on lamma-back in some forgotten year or other before being re-assembled on the shores of Lake Titicaca.

Imagine my surprise when the, then semi-restored, cargo ship popped up just outside my hotel window in far off Peru.

Here, for what it’s worth, is Marra’s take on Perth and Peru: https://www.youtube.com/watch?v=ktqsrMgceCs