There’s a forecast for rain tonight, but I doubt if it will come to much, and the Chinese folk next-door have been chucking rubbish into my front garden. Lucy of course is mainly oblivious and is tucked up in the shed. It has a black-felted roof and is splendidly warm despite the fairly obvious clutter. 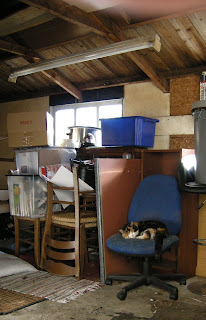 At some rotund age or ever she is quite entitled. “Do you know how old I am” she purrs as the vitamin-enhanced cat-soup goes down.

As I say, she can do more or less as she wants in her dotage. My son says she is 22. I disagree and suspect a year older. The railway station cat at Aberdeen lived to 26, but Lucy probably doesn’t really care about such niceties. Last week, and despite her age, she took lumps out of a local tom, and I don’t blame her. I may yet set her on the Chinese next door – that is, if one is allowed to even say such things nowadays.

They, the Orientals, are probably very very very fine folk. But chucking stuff into a neighbour’s patch kind of makes a mockery of neighbourliness. In fact, it makes no sense at all. I, for one, won’t be eating at their restaurant.

I dreamt last night that my book had been featured in the Times Literary Supplement. Now that’s a big dream indeed. I think it’s re-cycling bin day tomorrow. That should bring me back down to earth.

Duncan Harley is author of The A-Z of Curious Aberdeenshire