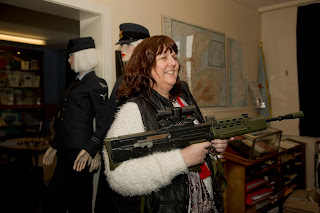 It’s unusual for me to post two WordPress posts on the one day however a conversation with Janice’s brother Michael, also a Catto, earlier set me thinking about a visit to the RAF at the airbase at Lossiemouth. As usual, it was something to do with an article and as usual Janice drove while I consulted notes and gathered some thoughts.
We were met at the gate by a Warrant Officer. I have no idea to this day what that is; but I have to say that he was pleasant and was as nice as ninepence. In the course of the day we were taken all around the base and fed lunch, for a miniscule and probably subsidised £2-32 per person, at the officer’s mess.
Following that basic but splendidly adequate aviator’s lunch sat next to some highly trained fighter-pilots, we set off around the base taking in the fast-response units and the Typhoons sitting around the maintenance hanger. There were around 4 aeroplanes parked there and, although I am probably not allowed to reveal this, all were red and shiny apart from the grey painted plane recalling the lost sons of some Deeside trillionaire or other. I seem to recall that it was less shiny and bore Airfix transfers saying something about heroic lost souls from Torphins or something.
Anyway, lost souls aside, the visit to Lossiemouth bore fruit. Not only did we see first-hand the town which spawned Ramsay McDonald; but we were allowed to handle a machine gun or two.
How cool is that?
Oh, and that conversation. Well it was related, but was more about Cyprus than Lossiemouth. Something about the Turkish invasion of the island in some far-off year or other. If I had the time I would tell you about it. But I don’t.
Janice liked the gun of course and who could really blame her. And, of course, the new book nears completion.