Had a wee half-hour break from pounding the keyboard today and headed out to Osprey Heights on the new fringes of Inverurie. It’s a new-build development and, until recently boasted a Bridge to Narnia. I referred to it in my old Leopard column in glowing terms as a source of local speculation.

‘The Bridge to Narnia has been a source of local speculation for several years. Constructed as part of the Osprey Village residential development at Souterford, the pedestrian bridge literally goes to absolutely nowhere and during the spring when the River Ury floods at Souterford, the decking of the bridge vanishes from view. Seemingly plans are afoot to build a footpath across the flood plain to link Osprey Village with the nearby retail park and, subject to satisfactory design and environmental consultations, the infamous bridge may finally find a new use. No doubt both C. S. Lewis and King Canute would approve.’

Thankfully this quirky landscape error has now been rectified and a splendidly aquatic black tarmacadam footpath now links the bridge to nowhere with the local retail park where no doubt drenched swimmers can partake of the joys of Home Bargains, Lidl and Argos. 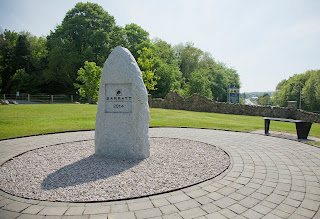 Imagine my surprise however when today, across the road from Narnia I spotted a new standing stone. Dedicated to that great god Barratt Homes, the white monolith stands proudly in a small clearing at the edge of the new housing development.
I can only imagine that the developers, in a fit of pique, decided to seek immortality on behalf of their founder and much maligned chieftain who seemingly died in far off 2014.