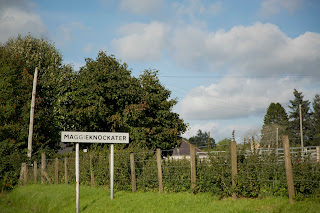 One of the joys of feature writing is that awful feeling when, despite your best efforts, you get it spectacularly wrong. It’s a bit like putting your head on the block really. Once in print, there’s no way back really. Digital stuff is different – but that’s a story for another day.
In far off 2013 I had penned an article about Maggieknockater. It was published in a couple of places including Leopard Magazine and of course Aberdeen Voice.  For those not in the know Maggieknockater is a tiny village on the A95 made famous many years ago when an Aberdonian named George McLean built an apiary by the roadside.
Now, I soon discovered that George’s efforts had led an Englishman by the name of John Drewry to pen a 32-step jig about the place. Aptly named ‘The Bees of Maggieknockater’ the dance was inspired when John drove past George’s banks of bee-hives on his way to Craigellachie. John seemingly failed to stop and almost certainly never tasted George’s heather-honey. But he was obviously impressed enough to immortalise the place in dance.
As for me; well I got it spectacularly wrong when, in print, I confused ‘Scottish Country Dancing’ with ‘Highland Dancing’. And, of course the readership soon let me know all about the quirky error.