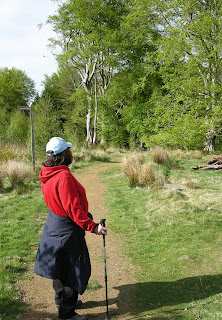 We decided to have a wander round Battlehill at Huntly over the weekend. Fortunately, we chose the Saturday full of sunshine and not the Sunday full of wet-stuff. We set off in bright sunshine for a bit then encountered a cold breeze from the north before circling into shelter and more strong sunshine on the lee side of the wood. It’s changed a bit since our last visit. The treeline around the summit has been re-planted and a series of archaeological digs have revealed some good evidence of habitation in past years. Post holes from bronze-age huts, some flint arrowheads and some ancient pottery have been uncovered and a fresh dig is planned for August 2018. Perhaps some bones of those slain in battle will come to light since seemingly the wood is named after a skirmish during the wars of Scottish Independence.
However not much information is available on-line or indeed locally. At first, I wondered if the clash-of-arms might have been as a result of the bloody end-game of The Battle of Barra but, given that Bruce’s Barra happened in May 1308 and sources indicate that the Battlehill skirmish happened a year previously, this looks to be unlikely. No matter, it’s a splendid place to walk around and, next day, we regretted not taking factor-seven along with us on the walk
Tomorrow, Monday, there will be some horse logging in the wood and a hardworking steed will be employed dragging some spruces from the south-side of the plantation. It should make for a splendid photo-opportunity, that is if the weather holds. And, I will take the bigger camera of course.