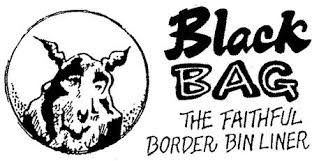 A number of eons ago I knew a man by the name of Graham Murdoch who along with Dave Smith published a series of comics with a distinctly Scottish Theme under the name of "Keltic Komix". Titles such as "Last Quango in Harris" and "The Mystery of Achnagoulash" took Scotland by storm as the pair travelled from town to town selling the comics from an old pram which they steadfastly pushed from Aberdeen to Inverness and beyond.Graham moved on to write and illustrate "Black Bag - The Faithful Border Bin Liner" in the adult comic Viz under the pen name of Snoddy (his pet cat). Black Bag of course was a spoof of the comic strip Black Bob the Faithful Border Collie, which appeared in the DC Thompson comic "The Dandy" from 1944 to 1965. In the original story line, Black Bob helps his owner, a shepherd round up sheep while also solving crimes, apprehending villains and generally doing splendidly good deeds.In the Snoddy version, an upper-class boy is paired with a bin liner and the heroic two-some generally wander around the countryside messing up the lives of the people they meet. In one episode they actually rescue Eurovision Song Contest winners Brotherhood of Man from a down a well.Most of the strips featured the heroic bin liner being callously killed at the end. You can never really tell with bin-bags I suppose.More at: The A-Z of Curious Aberdeenshire
aberdeen aberdeenshire Banksy Black Bob Dandy Dc duncan dundee grampian harley scotland Thomson